DALLAS, TEXAS, September 16, 2016 – Celebrating its 40th anniversary at CEDIA 2016, SpeakerCraft, from Core Brands, today expanded its top-of-the-line AIM Series 2 family of architectural speakers with the launch of two new in-wall left-center-right (LCR) speakers, the AIM LCR5 FIVE Series 2 and the AIM LCR5 TWO Series 2. Both are available for pre-order starting today. The announcement was made today at CEDIA 2016 in the Core Brands Booth #4100 in the Kay Bailey Hutchison Convention Center in Dallas, Texas.

“There is no better way for SpeakerCraft to mark its 40th anniversary of industry-leading innovation than with the development and market introduction of these new speakers. We took the key technologies developed for the AIM Series 2 in-ceiling line and applied them to these new in-wall speakers,” said Matt Dever, Core Brands’ SpeakerCraft Product Manager. “And the technology translated flawlessly, delivering an exceptional home theater-audio experience.” 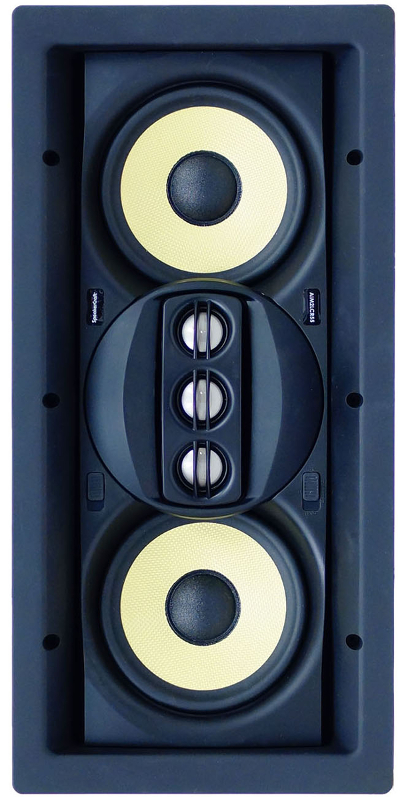 “The technologies we crafted for the LCR – like the APS and our exclusive Acoustic Isolation Technology™ – help us really stand above the competition,” said Sr. Director of Acoustics, Mike Strange. “More importantly, they help our dealers deliver an exceptional audio performance to their customers.”

Both of the new models incorporate Dual, 5 ¼” woofers angled within the assembly to prevent “acoustic lobing” – again improving clarity in the vocal frequencies essential to home theater audio. And, both employ SpeakerCraft’s Acoustic Isolation Technology to minimize acoustic energy transfer to the mounting and surrounding surfaces.

Both of these new in-walls can be paired with SpeakerCraft’s new Dolby Atmos® enabled in-wall height speaker – the ATX100 – to take full advantage of the latest object-based surround audio systems, such as Dolby Atmos and DTS:X®. In fact, the ATX100 is the first available in-wall height speaker to carry the “Dolby Atmos Enabled” moniker. The ATS500 System pairs the AIM LCR5 FIVE Series 2 with the ATX100 behind a single grille. The ATS200 System combines the AIM LCR5 TWO Series 2 with the height module, also behind a single grille.

“The new AIM Series 2 LCR5 family delivers standout performance, and together with the in-wall Dolby Atmos enabled Height Speaker, dealers now have multiple solutions to create a custom home theater experience in any room in the home,” Dever added.

The AIM LCR5 FIVE Series 2 and AIM LCR5 TWO Series 2 have MSRPs of $879 and $749 respectively. They are available for immediate preorder, and are shipping in October 2016. Custom installers can experience the new SpeakerCraft line at Core Brands Booth #4100 at CEDIA 2016.

The choice of custom installers for its bold performance, SpeakerCraft combines premier audio with designer aesthetics to fill the home with music and audio enjoyment inside and out. Internationally recognized for innovation in architectural loudspeakers, SpeakerCraft is distributed through a comprehensive channel of select dealers throughout the United States, Canada and countries worldwide.