PETALUMA, CALIFORNIA, December 15, 2015 – When the Lady Lola yacht first debuted in 2002, she was often called “The Most Beautiful Yacht in the World.” Now, 13 years later, the 205-foot yacht has returned to the charter scene with a new owner and refined A/V system, making her better and louder than ever. Though each charter trip has a different purpose in mind, guests can enjoy their favorite music through 16 zones of audio thanks to Lady Lola’s latest addition, new SpeakerCraft AIM Series 2 speakers installed by New York City and South Florida-based integration firm Kaiden Home Technologies.

“A technology manufacturer recommended our services to the owner of the boat, when he was looking to upgrade the existing A/V system,” President of Kaiden Home Technologies, Mike Kaiden explained. “When we were brought on board, we fixed all of the problems in the existing equipment, and continued to upgrade and add on to the system as time went on. When it finally came to audio, the Lady Lola owner was a legacy SpeakerCraft customer and enjoyed the old system, so we upgraded the system with new SpeakerCraft AIM272 speakers to improve performance and overall sound quality.”

The beautiful Lady Lola offers guests a premier yachting experience with interior finishes crafted by luxury designer François Zuretti. The yacht’s signature feature is the remarkable owner’s deck, which encompasses the entire upper level. With 16 zones of audio connected through a Kaleidescape music player, guests’ favorite tunes can be heard with just a few clicks whether they are enjoying the top deck or some time away from the sun indoors. 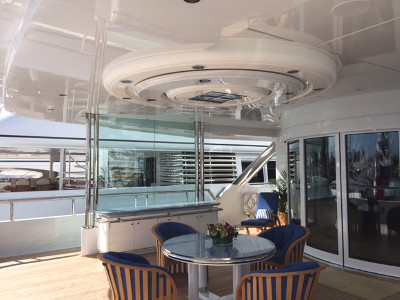 “When we began replacing the speakers, we were able to install them into the existing holes in the fiberglass panels of the yacht,” Kaiden continued. “After a few minor modifications, the SpeakerCraft models were up-and-running without issue. The new SpeakerCraft grills are a much sleeker look than the older style that were replaced, and the quality of the sound is better as well.”

Along with the audio system, the yacht’s automation system incorporates a Vantage lighting system, Somfy motorized shades and 3D TVs with surround sound. What’s more, Lady Lola offers a projection system, transforming the huge upper sundeck into a “Cinema in the Sky” at night, allowing guests to enjoy outdoor movies. 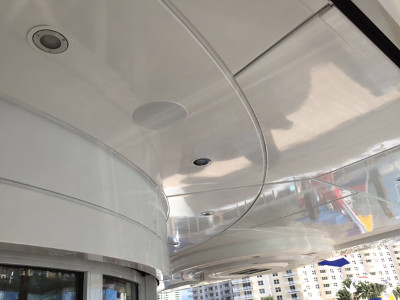 “Although we work with clients all over the country, Kaiden Home Technologies mainly services New York City, the Hamptons and South Florida areas, ” Kaiden concluded.

The speakers were installed just before the yacht was shown at the 56th annual Ft. Lauderdale International Boat Show. Known as the “Yachting Capital of the World,” Ft. Lauderdale, Florida showcased Lady Lola in the “SuperYacht” category.